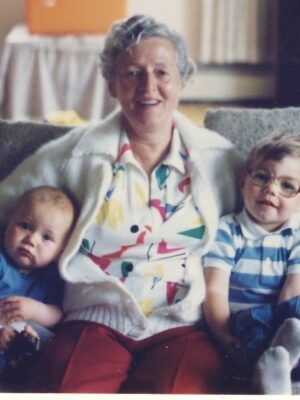 Doug Bebb has fond memories of spending childhood summers at his aunt Marie’s house in Selma Park, so when she passed away, Doug and his brothers, David and Richard, sought a way to honour her memory. Using the inheritance she bequeathed them, they established the Marie Steel Memorial Endowment with a donation intended to provide opportunities to emerging writers. The New Voices event is now a staple of Festival programming that is funded through the endowment, connecting new writers with audiences. “Marie was a life-long reader, learner and Festival volunteer,” says Franca, Doug’s wife. “She had so many books, and provided books to all our kids every year for birthdays and Christmas.”  Doug and Franca have attended every Festival but one since 2008, enjoying the Festival’s friendly atmosphere, engaging with new writers and watching the popularity of the New Voices event grow.  “Marie wasn’t a woman to seek fame, but she would have been happy,” says Doug of the endowment in her name. “We had no idea the impact it was going to make,” adds Franca. “We’re thrilled it has taken off and been so successful.”