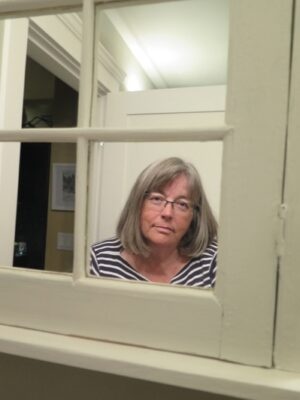 Sally Quinn has been attending the Festival since 1993. “I think I’ve only missed one since then,” she says. “It’s one of the events that brings me the greatest joy. I plan my year around that.” Sally’s mother read to her as child and she in turn read to her children, and even though they’ve grown and moved away, they will still sometimes attend the Festival together. “To me, reading is one of the most important joys and skills we can all have,” she says. She has a long list of highlights from almost three decades of Festival-going, including Joni Mitchell, Wayne Johnson, Wayson Choy, June Callwood and Shane Koyczan. If she were to claim a favourite author, it would be Richard Wagamese. “When he spoke the audience was absolutely silent…you could hear a pin drop.”  But she notes there are always unknown gems waiting to be discovered and she cites Dan Needles’ Letters from Wingfield Farm, as one of those. “I heard him there and then read his book to my mum when she had dementia and we were both laughing hysterically,” Sally recalls.  “Those moments are gifts.” Sally made a donation to the Legacy of Literacy fund to help keep the festival on stable financial footing. “Keeping the written word alive is so important.”