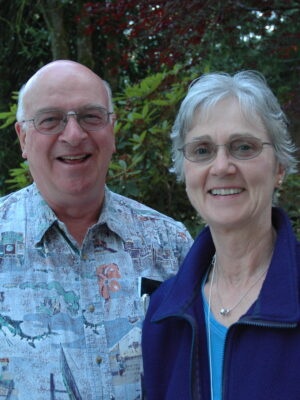 Len Pakulak has been an ardent Festival supporter for almost 30 years. He’s done it all, from swinging hammers while building the Festival Pavilion to slinging drinks at the Festival bar; from serving on the Fund Development Committee and to establishing the Lynn Pakulak Endowment Fund in memory of his wife, a former Board member. “I do my little part,” says Len modestly. While the Festival has greatly benefited from Len’s dedication, expertise, and generous donations, his relationship with the Festival has been rewarding for him as well, inspiring him to read more fiction. “It’s opened up a whole new world to me,” he says. He also enjoys serving at the bar during the Festival itself. “I’ve come to know a lot of the regular visitors,” he says. “It’s great to swap stories and catch up on their news.” Len is thrilled the Legacy of Literacy endowment campaign was successful in reaching the $1 million mark thereby ensuring the Festival’s long-term financial stability. “They’re doing really good things,” he says. “They need to be supported.”