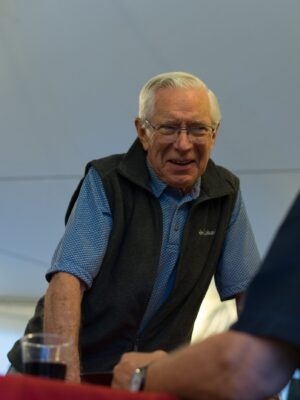 Don and Patti Gunning have been regular attendees at the Festival since 1998, returning annually even after moving off Coast. “It’s a really unique opportunity to mingle with the rich and famous,” says Don laughing. But the Gunnings are not kidding about the many writers they’ve met at the festival. Patti chatted with Peter Gzowski in the garden; the couple had a “fascinating” conversation about education with Rex Murphy; they’re “chummy” with Peter Robinson; and Kathryn Gretsinger grew up with their kids. But it’s the conversation Don had with Jane Urquhart, who’d just published The Stone Carvers, that had a most profound impact on him. “I’d been reading up on my uncles who’d been killed at Ypres in the first war,” recalls Don, a battle that comes up in Urquhart’s book. “I’ll never forget she said to me, ‘you’ve got to go.’ So we went a few years later and had a very magnificent, memorable, and tearful tour of the battlefield.” Adds Patti, “At the Festival you run into someone who is well-known and they really want to talk to you. That just doesn’t happen at other places.” The Gunnings’ donations to the Festival will go toward ensuring experiences like that continue. “The Festival is a treasured family event,” says Don.