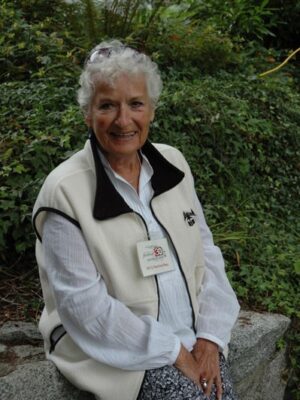 “When you get your new calendar, the first thing you do is mark off the writers festival,” advises Moira Clement, a veteran attendee who has been to every festival ever produced. Over 37 years, Moira has seen a lot of authors come through Sechelt. She recalls a young David Suzuki giving a presentation under a tent set up on the grounds of Sechelt Elementary, the early home of the festival. Then there was Margaret Trudeau, Alexandra Morton, Richard Wagamese, and Michael Ondaatje. Moira derives much pleasure from reading and attending the Festival, especially its laid-back atmosphere that brings writers and readers together face-to-face. “You can have private conversations with people who are famous or who become famous,” she says, recalling how she encouraged Yann Martel to put his book on tape because she has a visual disability. She was moved to donate to the Legacy of Literacy “to keep the Festival going,” she says simply. “It’s uplifting, it’s cultural, it’s recreational.” She also recognizes its important to the broader community, bringing the joy of reading and writing to students, and supporting local businesses through the tourism it generates. “The Festival to me has always been a source of community pride,” she says.