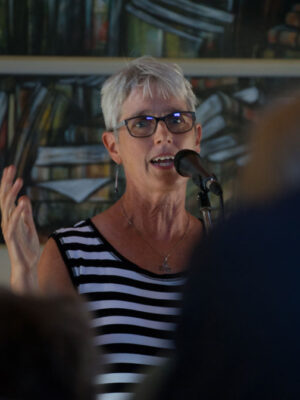 Jean Bennett has been instrumental to the success of the Legacy of Literacy campaign. “Establishing the endowment was based on the idea that we couldn’t count on government to continue their support for the arts,” she says, noting that the festival now has a stable source of funding to support its programming and initiatives. She joined the Board in 2008, served as President from 2016-2020, and in 2017 took on leadership of the Fund Development Committee. In just over three years, the Committee reached its goal. “I think this really speaks to how much the Festival means to people,” she says. In 2019, Jean established the Gwen Bennett Endowment Fund to honour her mother’s many contributions as a community volunteer, designating the fund’s proceeds to support Celebration of Authors, Books and Community. “It gives kids a chance to connect with someone whose words they love and validates their stories,” she says, recognizing that both CABC and the Festival are opportunities for community engagement and foster hope. “People come out with their world view shaken a little bit,” she says. “They don’t have to be big shifts, but they are shifts. Words have the power to change us.”